I have yet again updated page 1 to better represent the project at its current stage. The last time I did that was in February of 2017. Its true that this project has evolved along side the engine which is also why there has never even been a beta demo release (there have been 2 test releases which are the Redacted games. If you read this and never saw those, you can grab both here.)

You can clearly see, even if you only casually flip through the pages of this thread, that the game took a long time to find its tone and even genre. At this point I have written a lengthy design document and have everything pretty much thought out allowing me to work on small, episodic games and other pieces of artwork set in my own little fictional universe. This is nothing unfamiliar to any creative person and my other game projects went through a similar process but I really made that commitment to myself to stick to this project and its lore. I understand that so far, this might look like a generic shooter to any casual browser and its way less popular outside of the GG community than Shavra or other projects where. (relatively) However, people who saw my GDD liked it so far and I believe the world it builds has a lot of unique characteristics, including the characters it represents. It dawned on me that a lot of ideas in it are better suited, or at least better achievable for a person with a limited skillset such as myself in a novel.
Its a little life goal of mine to have one or 2 novels published. Nothing popular, just something that sits on the shelve in the SF section one day.

As for the game, I still want to craft a few, no doubt obviously amateurish, yet hopefully entertaining, episodic titles with rather simple story lines and gameplay, yet set in a more complex and hopefully captivating world.

Originally, all I had in mind with this project was a dumb little shooter, using GG’s early extremely limited and broken features. The name of the project, not necessarily catchy or aesthetic was a result of me simply throwing letters together until something clicked. I did however add a little description of what it means and how to pronounce it to page 1. Then it evolved into a corridor based horror shooter, then a third person action game (when that was supposed to be implemented) and eventually it settled on first person action adventure.

Where am I going with this?

Good question. The reason for this rambling post so few of you will read is that I wanted to send out a little life-bleep as I have posted so little about the game lately and have been somewhat absent from the game guru community as a whole and that I decided to kill off all my more lofty and ambitious game ideas.
I was learning the ropes of other engines lately, “engine shopping” as some call it and decided that all that was simply no longer for me. I am not too old

but just not at a stage of my life to be able to invest that kind of energy, to learn a complex tool for what is, lets be honest here, essentially a hobby activity. It all just feels like such a chore and is really not worth it for me. Most would require me to either form or join a team and I greatly prefer the helpful nature of this community over an all out collaboration.

Personally, the last real stride to go all out on a project, put in regular work hours and set milestones for myself was Skrye.

While it was hard for me to kill of “Shavra” as I tried to make it work in one iteration or another (Previous titles where Spyra and Relict) it was the right choice. I’m now experienced enought to just know what I can’t do and that game was something I was uttely incapable of ever pulling of. Acythian on the other hand allows me to make cool little things. Small fun games.

Some people on here are far more disciplined and diligent than I am. The truth is that while I enjoy my creative hobbies sometimes I don’t get around actually working on them for weeks in a row and therefore my projects can stagnate. I truely appreciate those of you who maintain an interest and keep checking back therefore all the more.

And thats really what I wanted to reduce my 3D hobby to given the little time I have for it : Fun. You’ll find that a lot of the things I do on here might seem less ambitious but therefore I hope they will somewhat soon be actually playable.

Thank you for reading even though it certainly took me a while to get to the point.

I’d also like to share some early screenshots from a city area. I’ve shown these around a bit before and mostly gotten good responses, albeit that there are a few things that need changing or adjusting. However, now that I have the general architecture of the level “carved out” I can start detailing it, which is the more enjoyable part.

Synchromesh had the really interesting idea that I might create some light aerial traffic with an animated skybox.

You’ll also see that its using dynamic lighting now…I’m still holding out for someone like Lee or Preben to implement something decent in the future. Here’s to optimism

If you are on the discord, you may have seen these before. 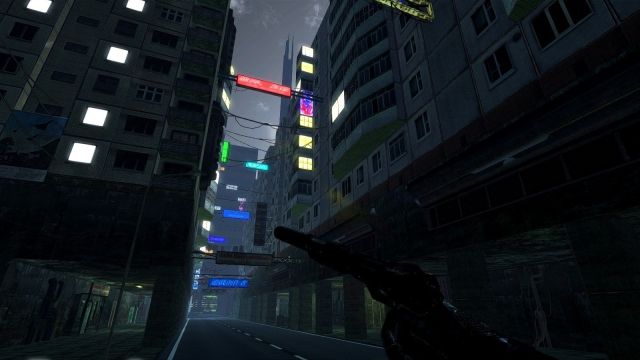 Light and visibility will likely change in this area in the future.

A screenshot from higher up. Several of these buildings have already been replaced and the whole scene is a lot less blue now. 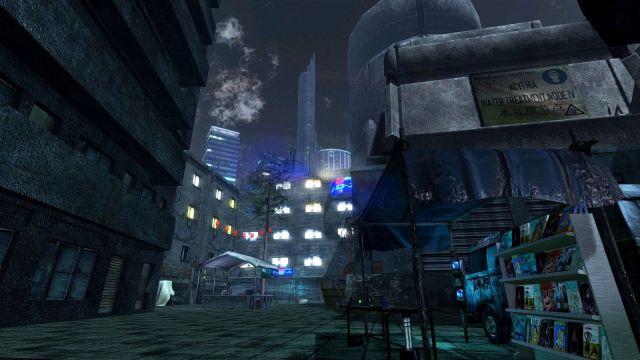 The small market will have a few NPC’s later on. 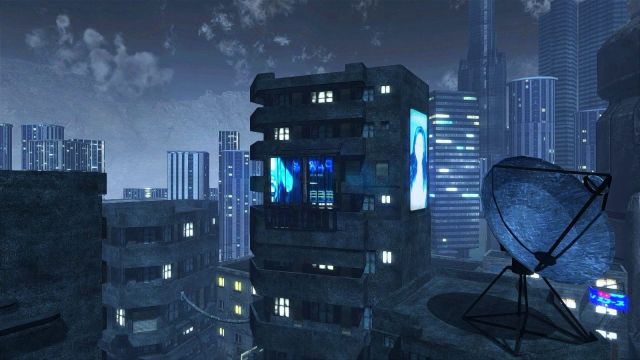 C&C is always welcome. Up next will also be a few soundbytes from the soundtrack for those interested. I’ll upload those as a YT video.

Who really has time to think about a summary of himself on the internet? I like art, women, gamedesign and I love coffee. Everything else is too much information.
View all posts by serygala →
This entry was posted in acythian, Development, Personal and tagged acythian, city, cyberpunk, Discontinued, fpsc, game, game guru, game guru graphics, neon adverts, Personal, Relict, scifi, serygalacaffeine, Shavra, upgrade, work in progress. Bookmark the permalink.