I haven’t updated this for a while because I was finishing my test game and have been trying things here and there. I feel like I have progressed enough to give this another whirl (as I try to achieve a higher quality than in my SF games)

In my shooter games I can rely on the rather simple shooty shoot mechanic to carry my games. I know that centering the screen on something you want to hit and then clicking is not necessarily cerebral doping but can be fun and challenging. I hold a lot of fondness for the FPS genre but this game is decidedly not one. Despite there being weapons I still plan on having this to be by and large an adventure game…facing all the challenges that come with this. As a fan of stealth games like the legendary Thief series I also try, knowing that I’ll likely get sub par results, to get stealth mechanics up an running. Its very possible that I’ll cancel the idea if it proves to be unfeasible.

So yes, I’ve written out the plot points of a smaller game in this universe and will deliver that as soon as I can. I have less time this year than I had 2016 but I’ll still try to keep up with this. Am I repeating myself here?? Anyway!! On to new stuff:

Despite dabbling in some gameplay mechanics I also tuned the visuals and had fun working on my maps!

Note that I have not yet replaced the HUD I had in Redacted : hired gun. Just pretend its not there, I’ll get behind crafting a placeholder swap out for that later.

There is a certain serenity to this village to me. I’ll ad some insects buzzing around when its polishing time! 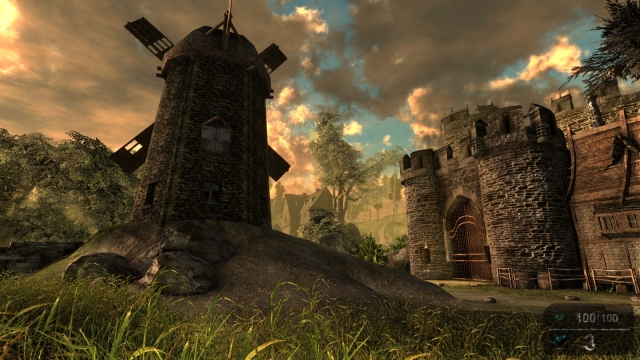 I try to make places have an organic feel to it with lowpoly clutter objects like this!

Me fooling around. There are no enemies in this level, just NPC’s. But hey! I like that tattoo I added so there ya go

If you look at that char, you won’t notice how much the AO is not working in the background (:

Its possible that it will be a while until I can post newer material since I’ll probably have a lot of tweaking to do to get a servicable stealth…illusion…going. For one level at least.

I think I mentioned everything I wanted to point out so I’ll hold back on blabbering on endlessly.

Let me know if you have any questions as alway:

Feedback and ideas are extremely welcome.

Who really has time to think about a summary of himself on the internet? I like art, women, gamedesign and I love coffee. Everything else is too much information.
View all posts by serygala →
This entry was posted in 3D Art, Shavra, The Archive and tagged adventure, amateur game design, art, fantasy, free indie game, friendly, game guru, level design, psychedelic, Shavra, upbeat. Bookmark the permalink.