Wolf
with lots of support from Bugsy and the community 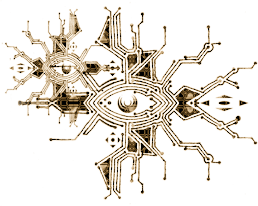 What drives you, stranger?
And don’t give me some trite answer I might find on a calendar or on the label of some ayurvedic teabag. A little respect would be in order, you are talking to a moribund man.
Do you ever take a moment during your pointless daily races to wonder why you even bother?
I did!
Countless times.
Whenever I stood, dressed in full combat gear, under the shower trying to wash off the blood, never feeling quite clean.
Whenever everyone I was getting to know died around me just to ward off yet another wave in an endless sequence of enemy waves or to hold a few pointless compounds in an utterly pointless war.
You may find my words to be …trivial. The musings of yet another drunk …or perhaps you can relate. This world is so far gone that there is a good chance that you are not so different from me.
I pulled through and what drove me after the war was simple. To give back. To save a couple of lives for a change,… rather than extinguishing them.
It might surprise you which was far harder to achieve.
I’ve founded the Lazareth in this part of town and as soon as the Neurophage took Acythia we where swamped with patients. We did our best to prevent the unavoidable. At least we managed to prolong the lives of a couple dozen souls. The successes tasted stale in the face of the mass extinction the phage caused.
And for all the bravado and the medals I received for killing in the war, the pharmaceutical companies scolded and ridiculed me for my attempts to treat subculture scum. They didn’t use these exact words but it was the sentiment.
They insisted that people rather supported their charities than our unsanitary lazareth, spreaded lies about my organisation, ordered hits on 2 of my nurses….I can’t link anything substantial back to them, of course, but come on! We are all adults here.
I grew pretty cynical. More so than I was before if you can believe that.

But then…they brought in this girl. Must’ve been 16 when they carried her in. Prostitute overdosed on pink dust, no blight spores in her as far as we could tell. I fell in love. Don’t give me that look…not in a sexual way, …you degenerate.
You see, in the eugenics war I led a special forces group. We where highly augmented. They took us and turned us into weapons. I must have been in my mid 20’s then.
There it is, that look again.
You don’t believe a single word I’m saying, do you? The reconstructive nanites in my bloodstream prevented my remaining tissue from aging. I’m 85 years old, son.
I’m more machine than I am human. They didn’t take my humanity, the war took care of that, they took my ability to …reproduce and seeing this fragile body on the gurney reminded me of something. Something ancient, older than all this cybernetic heresy around us. I felt the need to protect her. I wanted to be her …father.

If that doesn’t sound too crazy for you. Tracking down her pimp and human trafficking network was easier than I expected. I had to call in a few favours but…nonetheless…took me only a couple of weeks. You see, I once swore to never kill a human being again but these people…they’ve chosen not to be human. Killed ’em all. Not even felt anything but relief. Kept an eye on law enforcement communication. They noted where they found the bodies but didn’t even bother with an investigation. What kind of cop would cuff me for taking out a pedophile ring? None rotten enough, not even in these troubled time.

We almost lost her, I paid for a new liver myself as well as a pair of cybernetic legs. Necrosis took them, too much dust can do this to you, you know.

You are still here? Admirable! So few people seem to have the …attention span to take all of this in nowadays. At least so it seems. May I buy you a drink?

Anyway, the years it took me to educate and raise her where the best times I’ve had. Of course I’ve also taught her how to protect herself. We almost managed to forget about all the decay around us at times. But she became a young woman and although the scars of her past have healed, at least so it felt, she became increasingly altruistic. And I don’t mean in a healthy way. She felt like my work in the lazareth, was a waste of time. Only a droplet on a hot stone as she’d say and that the cancerous systems that took hold after the war had to go. She eventually joined this resistance movement. You’ve heard of it, even though you’ll probably won’t admit it.

One of their fences got wind that this new holier-than-thou religious cult, the Kyanic Order, has an experimental cure for the Neurophage stashed away. Apparently they wanted to wait for the city to be on the brink of extinction. And when there was nothing left but desperation they’d swoop in like big divine saviours, assuring the legitimation of their cult and thus ultimately gain sovereign power over the city. My little girl was the prodigy of the rebel network and they’ve sent her in to steal the antidote. It went about as well as you could expect.

She got caught and they sentenced her to death. I was present during that hearing. The order voted against the courts ruling, claiming they’d want to spare her soul and wanted to cleanse her on their sacred grounds.The citadel is what they called it, an enormous compound on an island a couple kilometers south of Acythia. Since she stole from the cult and would be out of the city this way the court agreed to them taking her to their property. They claim it to be a retreat for their higher ranking members, their little “Vatican” so to speak but… the myths and legends surrounding that facility are probably more numerous than those surrounding that cult itself. I don’t know what they plan to do to her there but I do know that she’s likely not intended to survive the process. What choice do I have? I know there is nothing but a fools hope, but as long as there is any hope to get her out of there alive, I’ll have to try.
Tomorrow I’ll call in my last favours, dust off my old gear and get myself killed. Ha!
The sea leading to their damned island are littered with cliffs and rock formations. Remnants of the heavy artillery fire that shaped this coast back during the war. If I keep my most of my non-essential augs in standby and take a small boat…or raft… keep the sun in my back and approach through these formations they’d only pick up my signal if they’d actively look for me. Here’s to hoping that they won’t!
Its a chance… however slim. And there you have it….that is what drives me. My daughter. The last remaining flower for me in this vineyard of rust and corrosion.
I’ll get her out of there…, any means necessary … and if I die trying at least I make sure I’ve given their false prophets. with their grandiose messianic delusions something to mourn and preach about. …by the break of dawn!
TL;DR

A retired special forces agent infiltrates the headquarters of a religious cult to rescue his prodigal foster daughter. Hereby being unwillingly dragged into a widespread conspiracy.

If you where following this project for a while you might be confused by this shift in plot and style, this code snippet explains the numerous concepts and versions this game went through.

Due to the everchanging nation of earlier iterations of this game you might see content that will be very different or not in the final game at all. This is a work in progress thread after all. Style might also be subject to change but I’m quite happy with late results.
Screenshots 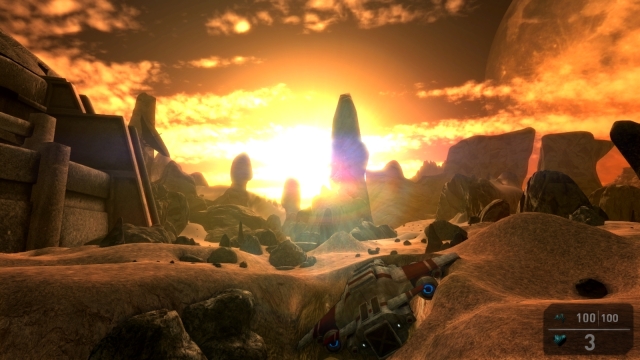 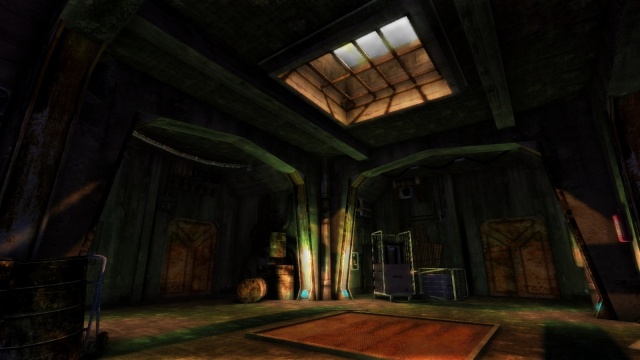 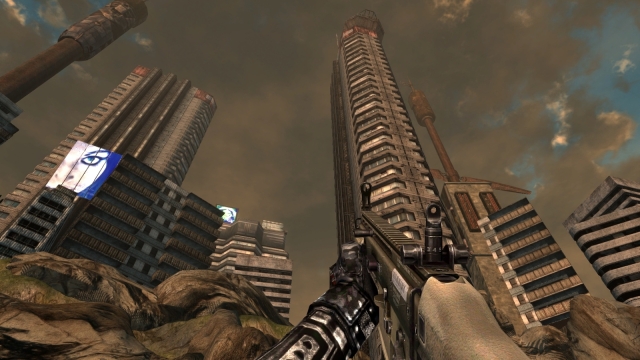 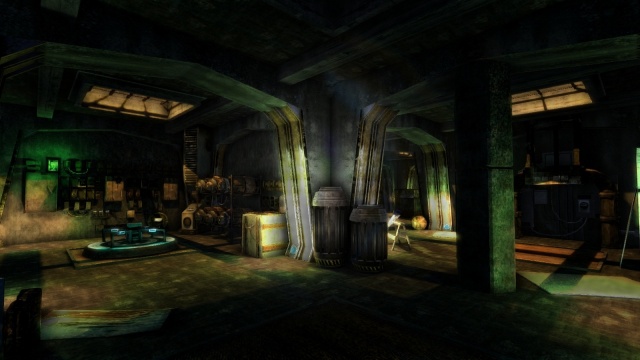 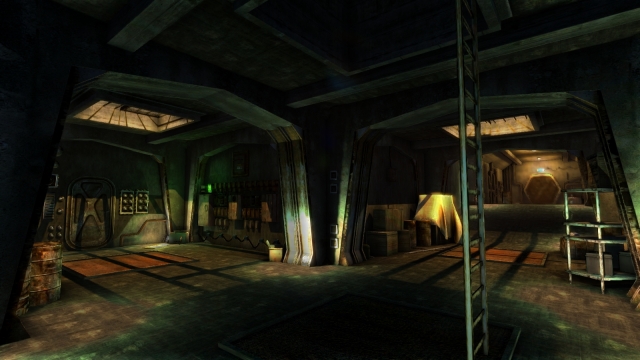 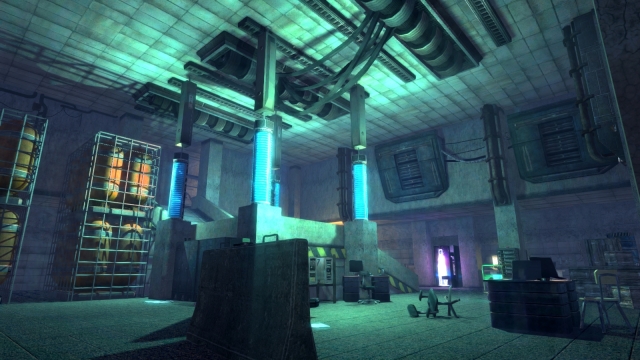 Who really has time to think about a summary of himself on the internet? I like art, women, gamedesign and I love coffee. Everything else is too much information.
View all posts by serygala →
This entry was posted in 3D Art, Development and tagged acythian, cyberpunk, free indie game, future, game, game guru, gothic, grunge, retro, retro future, rust, scifi. Bookmark the permalink.