Symbiotic was the spiritual successor of Lunar Crisis. It was a survival horror shooter set on a space station that relied heavily on adventure mechanics such as looting and puzzles.

I was trying to push the visuals pretty far with the skills I had at the time. If this peaked your interest, I’ll copy in what my younger self wrote at the time at the bottom of this post.

I have taken great care to design the station as logically and coherently as possible. With many custom signs, displays, markings etc. 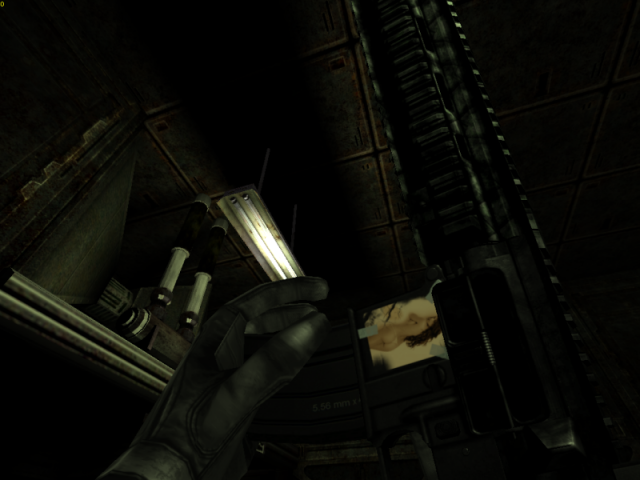 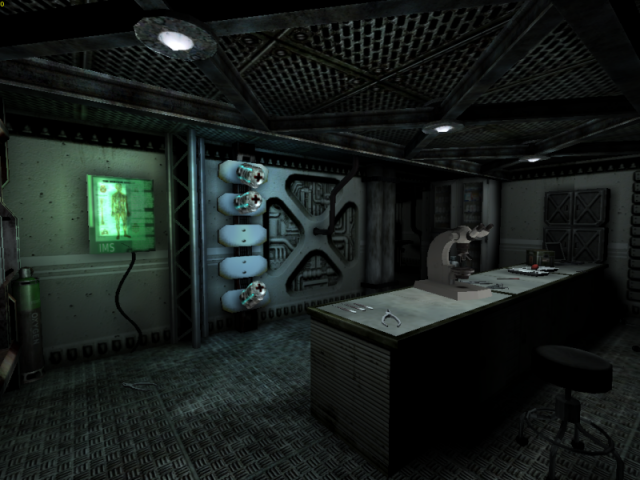 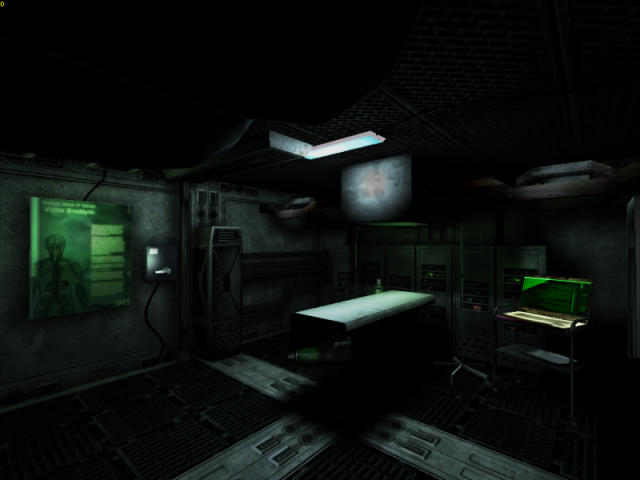 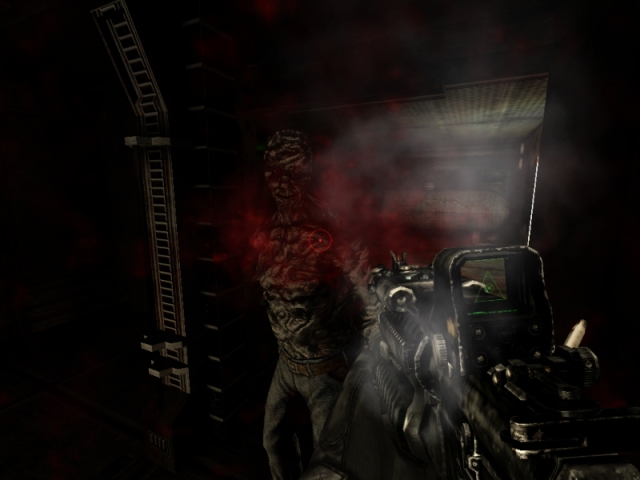 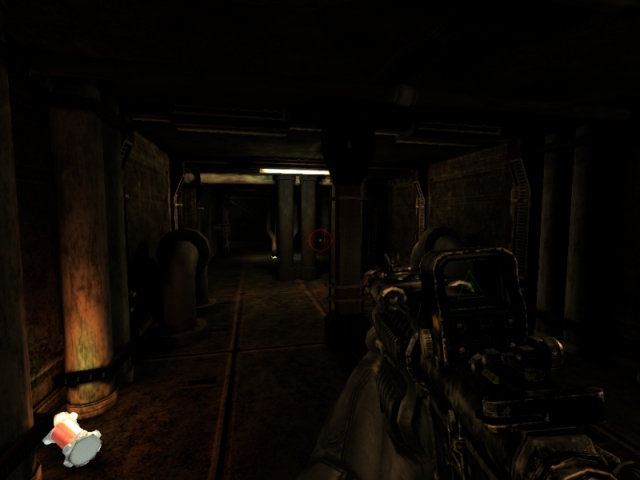 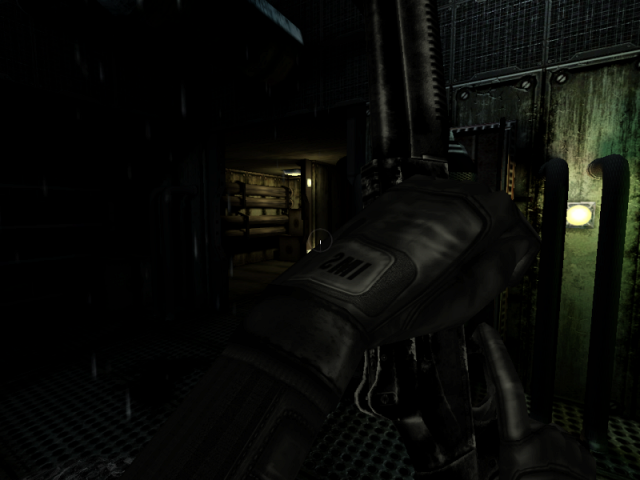 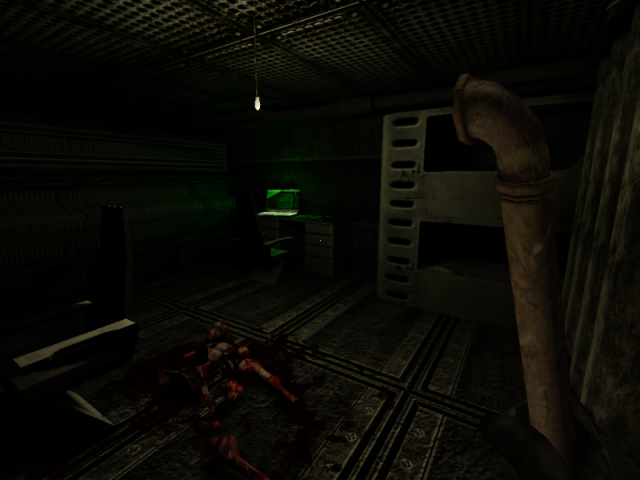 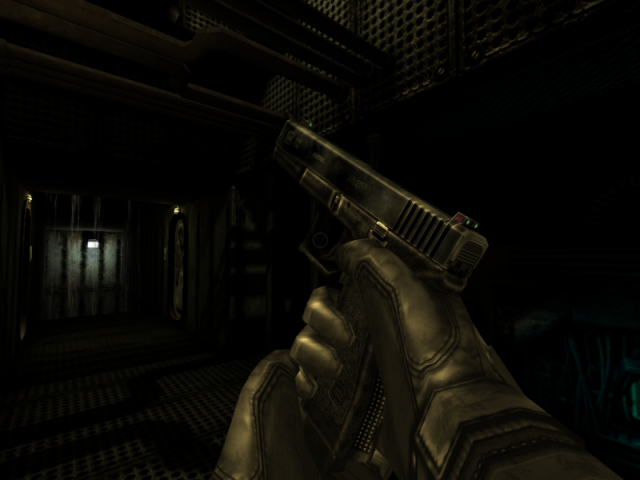 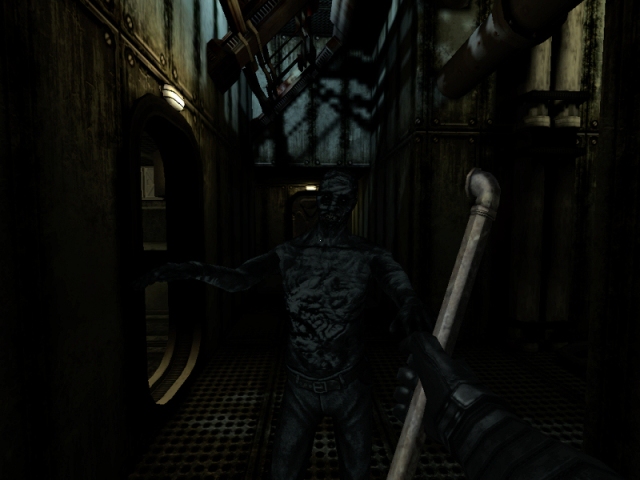 You play as Victor Bleddyn. Biochemist and convict of the International Moon Base Jail. But you went through a lot…and except from the awkward lightning, depressions, loneliness and wierd gravity (even with stabilisators) there was this time unloved and without women that slowly tormented you. The 25 years young chemist Samira came closer to you. You fell for her and never asked why she was on the IMS. She had some strong psychosis, and one of them was to kill her beloved ones so they never could leave her. You’ve been one of her loved ones… she wanted to kill you with a selfmade poisoncocktail she injected you right in the neck. After three months of Coma, you woke up in the infirmary of the IMS… but something went wrong… you where alone …but not for long. Something is watching you with dead eyes from the dark corners of this hell. Read more in Description!!

Adventure/First Person Shooter
This isn’t a typical first person shooter. It is a FPS/ Adventure Hybrid.
All rooms in this game are fully interactive…you can search cabinets, read from computer/terminal screens, use a coffee machine to boil yourself a good mug of coffee, you can even flush toilets.

Most of these features are volontary. You do not need to search every corner of a room to proceed because I didn’t want the player to be bored. (I remember me playing point and click adventures and clicking a half hour in an image without finding the damn clue… o.O I do not want this to happen in my game.) However: To Proceed in this games you need to solve problems.

These tasks are usually made the way that the first logical though the player has usually works, even though there might be multiple ways to solve it. For example: You can blast a log open with your shotgun OR you hack it on the right computerterminal OR you find a way around this door. Its up to you.

You’ll find PDA’s and Laptops you can use to find information on actual tasks. Later in the game you’ll also meet NPC’s who give you information. The game has a Multiple Choice Conversationsystem and Doom³ like audiologs that help to understand the story. You do not need to read all of that stuff and click yourself through hours of conversations to beat this game…but you CAN do it if you want to.

The Health System
Its a typical FPS Healthsystem. You get wounded, you need to find goodies like medipacks to heal yourself. However, there are plenty of items you can collect and different medical supplies you can find that might have other effects on your character. This was as far as I was able to go with the FPSC engine.

The Combat
You do not only fight Zombielike Creatures in this game, but also enemies with firearms and larger/faster monsters. Ammunition is mostly a rare good and the number of enemies is elevated.
But there are a lot of melee weapons you can pick from your environement. I’m currently trying to find a way around the usual FPSC Guninventory system so the player can swap one melee weapon for another. You should be able to grab pipes from walls, use wrenches you find in toolboxes, a full metal fire axe, a combat knife, a hammer and maybe even Weapon Melee… but until I can say for sure that all these features are bugfree and fully working you need to know that there will be melee fight FOR SURE.
The firearms have a futuristic touch and some features you don’t expect from an FPSC Game. There are also some explodable stuff in the maps the player can use for it advantage (or suicide).

Some heavy objects can be picked up and be thrown at enemies.

The Missions
You do never run around in a level without knowing what to do in this game. There will always be NPC interaction etc. to keep the story going and giving clear goals to the player as he proceeds through the moonbase.

I guess its already quiet nice for an FPSC Game. There will be more. This game will have a whole lot
of energy/water/fire effects that aren’t two dimensional but shader based (without killing the performance). I try to use as much specular and normalmapping as I can to create vivid environements.

The Architecture of the deserted moonbase looks also much less “cubic” as in your usual FPSC Game.
There are always a lot of arches/pipes and flickering lights to keep the mood set.

I will put in as much detail as I can while keeping the game running stable on most recent systems.

You will also be able to customize Resolution and Controls and some other stuff in this game.

Keep an eye on the regular screenshot updates of this site if I got your attention. 🙂

The game follows its own rules in coloring. It does not use fullscreenshaders. The maincolor is green, a lot of lights, holographic sights, computersystems etc. are green. Blue and orangeish/yellow lights should give a feel of isolation and decay.

The Game will have the best soundeffects I ever made. Including selfmade ambient sounds and music. I picked up my old guitar and I’ve been spending some time tweaking some synchronizer settings to give this game a really enjoyable soundtrack. It also has voiceacting!

1998: Beginning of construction work on the ISS

2010: The ISS is the largest human made earthorbiting thing

2027: A little miningdevice has been placed on moon.

2028: The device was effective. The excavated greenish crystals enabled a new way to gain energy

2034: Construction of a huge Jail near the arctis has been cancelled due to human right agendas and not enough funds. The prisons on earth where overfilled

2035: Scientists discovered a lifeform that was able to bind with another lifeform via symbiosis.

The plaiting gets nourished bye the host and trys to keeps him alive as good as possible. Its enhancing its host .Even lost legs did regrow on testlabrats. The Symbiont could be an antidote against all sorts of illnesses and dieseases.

2036: First chances in law which reactivated the death sentences and which didn’t send minor delict-criminals to jail but let them do some dirty-work.

2037: The Moonbase has been enlarged again and has been named to “International Moon Station” .IMS

2040: The Moonbase grew to huge scale. Due to depressing working conditions and radiation, loads of workes where quitting their jobs and / or developed minor psychosises.

2042 : Moonbase project about to be cancelled

2042: A new lawreform has been established which would send highly educated and other competent criminals to the moonbase to work there under strict precautions.

2045: The Moon is prison and workspace for highgrade criminals.

2047: A psychological Researchfacility has been builded on moon to do some controverse and immoral tests on the dangerously insane.

2047: Security forces on moon have been reinforced.

2048: Computersystem “TRISH” has been established to ensoure security even more

2050: Secret Facility has been builed on moon for further test on the Symbionts and for first illegal tests on human beings.

2051: “Trish” has been used as a communication module towards earth. Inmates where allowed to send a message to their relatives on earth every month.

29. Januar 2052: The Symbionts where developing an own collective consiousness and they took over the minds of theirs hosts.It was behaving more like a parasite. The difference was that the symbiont enhanced its carriers…but has to be fed…and it wanted the base for itself. The rioting of it was unstoppable…and its possibilty to find ancient structures in the genetic pool of its host and to deform its bodys was new… the base was lost…but the TRISH System… which mainpriority was the protection of the symbionts, kept sending messages to earth that everything would be alright.
…. 3 months later…. you awoke from coma:
You play as Victor Bleddyn. Biochemist. You’ve been going home from work 2 hours earlier as usally, rented a B-Movie and bought some snacks from the gasstation…you just wanted to relax with your wife after a hard week in the lab. But things weren’t going you’re way. You’re wife found interest in the neighbor. You caught her “having some fun with him”. In the black stockings YOU bought her and in YOUR kitchen. Guess you’ve lost your head…you’ve been running through the hallway in the kitchen, took the cooking knife from its wooden rack and started to stab the neighbor. 24 hits…thats whats the pathologist sayed. You’ ve been cutting the throat of you’re shocked wife later. You’ve had a mental break down and police found you screaming and in bloodsoaked clothes in your frontyard.

You’ve been brought to the International Moon Station after 2 years of captivity in an high security jail near iceland. You turned into a selfhating zynist
You’ve been working under stict securtiy precautions, the common tone was rude and the ambience on the moonbase far from pleasant. But you went through a lot…and except from the awkward lightning, depressions, loneliness and wierd gravity (even with stabilisators) there was this time unloved and without women that slowly tormented you. The 25 years young chemist Samira came closer to you. You fell for her and never asked why she was on the IMS. She had some strong psychosis, and one of them was to kill her beloved ones so they never could leave her. You’ve been one of her loved ones… she wanted to kill you with a selfmade poisoncocktail she injected you right in the neck
Lucky for you, that the mixture wasn’t that strong and you woke up in the Infirmary of the IMS.
But something was wrong…

Who really has time to think about a summary of himself on the internet? I like art, women, gamedesign and I love coffee. Everything else is too much information.
View all posts by serygala →
This entry was posted in The Archive and tagged fenix mod, fpsc x9, fpscreator, game, horror, indie game, international moon station, leveldesign, serygala, space, survival horror, symbiotic, the cosmic prophet, ultra low budget, videogame, wolf. Bookmark the permalink.